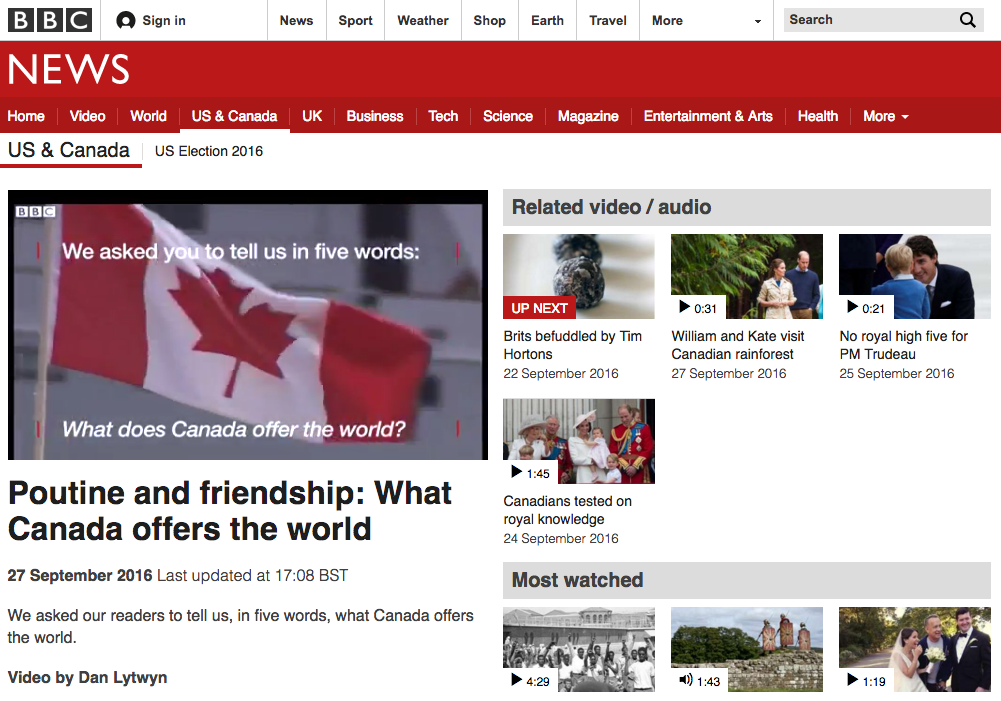 Why BBC decided to set up shop in Canada

According to a press release sent out earlier this year, BBC.com gets about 5.6 million Canadian visits a month. In a report on Canadian media concentration released in November 2015, author Dwayne Winseck found that some international outlets like the BBC, CNN and MSN News trumped some Canadian outlets for traffic.

But how will three people cover a country that spans a continent? J-Source spoke with Ben Bevington, the BBC News North America editor, about why BBC decided to set up shop in Toronto and how the team plans to approach its news reporting in Canada. This interview has been edited and condensed for clarity.

J-Source: How long have you actually been in Toronto setting up the new newsroom?

Ben Bevington: I came in earlier in the summer. This has been quite a whirlwind where we got the business deal, made the business case, got the funding to put it together. We started recruiting at the beginning of August.

J-Source: What made you think you had to have an office on the ground in Toronto instead of just commuting from Washington D.C.?

B.B.: It’s something we’ve been looking to do for a while. News is about making stories relevant, particularly digital news. If you don’t make news relevant, users go somewhere else. They have to have some sort of connection to the piece. The only way you can really build that proper connection with an audience is if you have people on the ground who understand that audience.

J-Source: What is it that you think has drawn Canadians to the site? We have the Globe and Mail, we have other national outlets that do some international reporting—why the BBC?

B.B.: People are interested in the world. It’s a confusing time. There’s lots of major events happening all around the world (such as) terror, the refugee crisis, the economic global collapse—all these things have shown how interconnected the world is. People want something that helps them connect the dots, that helps them understand what’s happening.

The BBC obviously has a reputation over many decades for being the most trusted, for being impartial. Therefore people come to us for that—to try and help make sense of what’s happening in the world. What we’re trying to do is take that a step further. We want to build a better connection with the Canadian audience where they come to us, but we’re better able to serve them with stories that make sense of Canada’s place in the world.

Lyse Doucet’s piece about the refugee crisis being done from here is an example of that. That’s a complex international problem that’s playing out lots of different ways.

I think Canadians want two things from us—they want better reporting of their country, they want us to tell the interesting and important stories that are happening in Canada and they want a global audience to know about and properly understand Canada and then they want us to also provide them stories internationally that seem relevant to them.

J-Source: There has been a lot of shrinking of the media industry here, especially in the last year and that’s led a lot of commenters to say there’s a business opportunity for international outlets. Is that the BBC’s mindset? Are you seeing a hole in Canada’s reporting landscape?

We’re trying to do something very different. It’s about finding stories that are a little different to what’s already been done. It’s about trying to connect it to stories of global interest and trying to tell stories that will be relevant and have resonance to a global audience.

J-Source: You’ve got a three-person newsroom based in Toronto covering a very large country. How do you see the newsroom actually functioning? How are they going to be chasing stories every week?

When there are big, big stories we will cover them and we will look to do it in a fast and authoritative way.

What we are looking to do is have the Canadian team look at the news agenda on a daily basis and think, “Is there a story out there today that the world needs to know about? Is there a story that’s happening in Canada where the BBC can put its own distinctive spin on that?”

That’s the way I want them to look at their editorial decisions.

B.B.: I think we need to see how it develops. There is always a business case that sets projections. That’s how we got the funding in the first place.

The sense is that we’ve got a very robust case.