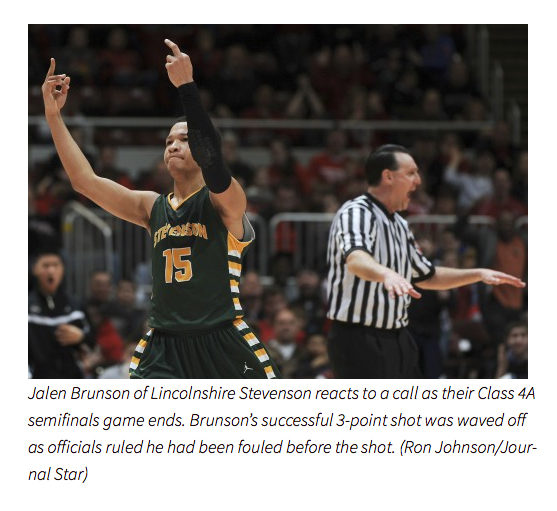 Why context is crucial in photojournalism

Photos do tell the truth, but not always the entire truth or the circumstances leading up to that photographed moment. That’s why photojournalists and editors have an obligation to contextualize photos better, writes Mount Royal University journalism student Jesse Yardley.

Screen grab of the Journal Star

Can a photo tell the “truth”?

It’s an old debate. Some say pictures represent objective truth, while others claim they can be misleading.

When the Journal Star, a newspaper in Peoria, Ill., recently published a photo on its website depicting a high school basketball player, Jalen Brunson, “flipping off” the opposing team’s fans, it rekindled the argument and raised important ethical questions for photojournalists and editors: Should photos be published if they only tell part of the story? What if they have the potential to cause harm?

The photo in question, taken by Ron Johnson, clearly shows Brunson with his hands raised above his head, the middle finger on each hand extended. It ran with the caption: “Jalen Brunson of Lincolnshire Stevenson makes a gesture to the Chicago Whitney Young crowd.”

Brunson was apparently frustrated with a call made by the referee to wave off his successful three-point shot because he was fouled before he made the attempt. Had he been fouled during the attempt, the basket would have counted.

Judging by Johnson’s photo and caption alone, Brunson’s actions seem unsportsmanlike. It was something the officials did not see during the game, but the photo was later reviewed by the Illinois High School Association and led to Brunson’s suspension for the next game.

Scott Strazzante, a photographer working for the Chicago Tribune, also photographed the gesture as well as the moments immediately before and after. His photos provided much-needed context about what really happened. It was Strazzante’s conclusion that the gesture was unintentional and he posted a series of photos showing Brunson’s entire range of motion to back up his opinion.

And according to a video of the game posted to Poynter, Brunson’s middle fingers seem to have been extended “for about one-fifth of a second.”

“Seeing the play happen through my viewfinder, I was very confident that the gesture was not intentional, “Strazzante wrote on the Chicago Tribune blog. “I felt the image could be misconstrued, so, I decided that it would be reckless of me to transmit the photo and take a chance that someone who didn’t see the play unfold would think that Jalen Brunson was flipping off the crowd or officials.”

In my opinion, photos do tell the truth, but not the entire truth. Johnson’s photo is an excellent example of an image that needed to be contextualized. When publishing controversial images, it is the ethical responsibility of the publication’s decision-makers to consider how best to communicate the truth of the situation or event.

Okotoks Western Wheel photographer Jordan Verlage said that it is the responsibility of journalists to tell the truth and to consider that photos don’t always represent what really happened.

Verlage is getting at the central issue here: potential harm. It can be argued that Johnson’s photo did more harm than good. That is not to say that a harmful image should never be published, but if it is, there has to be a good reason for doing so. Photojournalists and editors must consider the news value of a photo, whether or not it serves the public good and whether it is salient to the story being told before publishing it.

Apparently, context was not available to the Journal Star because the paper’s camera system uses strobe flashes, only capable of capturing one photo per second. The Journal Star’s digital editor Adam Gerik said that was the reason the publication only had one image to work with. It was only after Strazzante’s photo series was posted online that the Journal Star’s decision to run the photo came under scrutiny.

“I think it’s interesting,” Verlage said. “He did it. Maybe he didn’t intend to do it, but I think explaining it is the most important thing. I think some papers would run the photo just because of its shock value. It gets people interested. And some people might think that’s a good thing—for business.”

According to journalist Al Tompkins, who wrote about the controversy for Poynter.org, photographer Johnson later apologized for running the photo saying: “Should I have put my image of Jalen Brunson’s gesture during Friday’s semifinal game on social media? Probably not. It was a judgment call between myself and our sports editor who wanted it online. The caption was questionable. Was he directing his gesture to fans or reacting simply to the call? Intentional or just a reactionary gesture in the heat of the moment? I admit that I didn’t have the answers at the time, nor did I analyze the situation frame by frame. If I had the choice to decide again, I would not [have] edited the image for the web because I don’t have the answers to those questions. My intent was never [to] make an opinion or judgment on the player and the gesture he did during the game, and am sorry for any harm the photo may have caused to him and his family.”

Making editorial decisions is not an easy task. Deadlines, limited resources and the necessity of making a profit complicate news production and can sometimes result in decisions that undermine the truth.

“Pictures run with words in the mass media for a reason: they need explaining, frankly,” he said.

Black adds there are a number of things that could have been done to help provide context before the controversial photo was published including talking to other photographers, reporters and fans in the stands, or the player himself to confirm what really happened. “Unfortunately that’s often not part of the process because of time constraints.”

The Star Journal updated its story, noting that the gesture was claimed to be unintentional, but has not offered an apology for running the photo.

There’s no doubt that Brunson is an exceptional basketball player. Despite the foul that nullified his three-point shot, he finished the game with 56 points, setting a new Illinois semifinals record.

After an appeal hearing, Brunson’s suspension was rescinded just in time for him to play his next game.

Jesse Yardley is a second-year journalism student at Mount Royal University in Calgary and a professional photographer at Calgary ProPhoto.