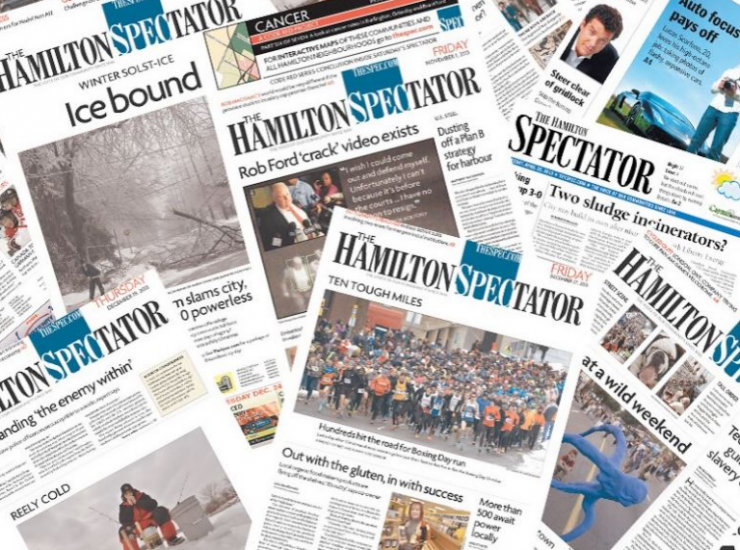 CBC, CTV and the National Post posted a controversial video from the Bosma trial. The Hamilton Spectator did not. Here’s why.

Editors at the Hamilton Spectator chose not to post a controversial video shown to jurors at the Tim Bosma trial on their website.

Bosma disappeared on May 6, 2013, after leaving his home in Ancaster, Ont., to give a test drive of a Dodge Ram 3500 he was selling on Kijiji and Autotrader to two men, according to Global News. On May 14, remains that police believe were Bosma’s were discovered on Millard’s farm in Ayr, Ont. Millard was charged the following day, while Smich was charged later that month. The men are co-accused with the first-degree murder of Bosma.

In the video in question, taken in the early hours of May 7 at an airport hangar owned by Millard, a flame can be seen in the top right corner of the frame for a few seconds. According to the Spectator, the Crown attorney’s theory is that Millard and Smich used a livestock incinerator called “The Eliminator” to cremate Bosma’s body at the hangar.

According to the CBC, investigators found bone and tooth remnants in it, which they say are those of Bosma’s, though John Fernades, a forensic expert, told the court on Feb. 23 that he could not make an identification based on how few remains were left.

CBC Hamilton and the National Post both posted the video, along with several other surveillance clips, as part of their coverage. CTV also broadcast the clips Mar. 9 and posted them with a web story.

“The Spectator has chosen not to publish this video out of respect for Tim's family,” wrote Susan Clairmont, the Spectator’s crime, court and social justice columnist, the day after the videos were presented. She also defended the decision on Twitter, where the court of public opinion was divided on whether Spectator editors made the right move.

“I guess you could say it was based on geography,” Howard Elliott, managing editor at the Spectator, told J-Source. “The Bosma family and friends—there are a lot of them that live right here in our community and many of them are our readers. We just decided in this case that the value of protecting them a little bit, considering what they are already going through with the trial, outweighed the value of displaying that particular content.”

Elliott noted that this trial, which began on Feb. 1, has hundreds of pieces of evidence, not all of which the paper has written about or posted.

However, the video is described in Spectator reporter Molly Hayes’ account of the proceedings as well as in Clairmont’s column. “I think that the descriptions of what happened in the video are very powerful in themselves,” said Elliott. “It’s not like we omitted that part of the story.”

Some of the response online called the Spectator’s decision “censorship.”

“What people are saying is this is a very compelling piece of evidence, and we agree,” said Elliott. “But we just thought on balance, our judgment was to try and be a little more humane to the people who are already suffering through this.”

Rick Hughes, executive producer of CBC Hamilton, one of the outlets that did post the video excerpt, said that they are always mindful of sharing news “in a way that minimizes harm,” and shows respect.

“Because it wasn't an explicit moment—it was a very brief flash of light essentially—that it made sense to show the audience what the jury saw,” Hughes said, noting that the video was presented in context and didn’t draw “undue attention” to the moment in question.

In the online story by CBC Hamilton reporter Adam Carter, the segment in question was the third in a series of five sequential clips in an edited video, each of which was introduced in the language used by forensic video analyst Michael Plaxton, the witness who introduced the surveillance videos in court.

“We’re balancing that need to show that respect and be sensitive,” said Hughes. “While also making sure that the legal and judicial process is open and transparent, which is a very important value in our democracy.”

Elliott said the decision not to post the video was one that top Spectator editorial staff agreed on.

“We don't make decisions because they are popular one way or the other. We thought in this case this was the right thing to do. I think we would stand by that decision in hindsight.”