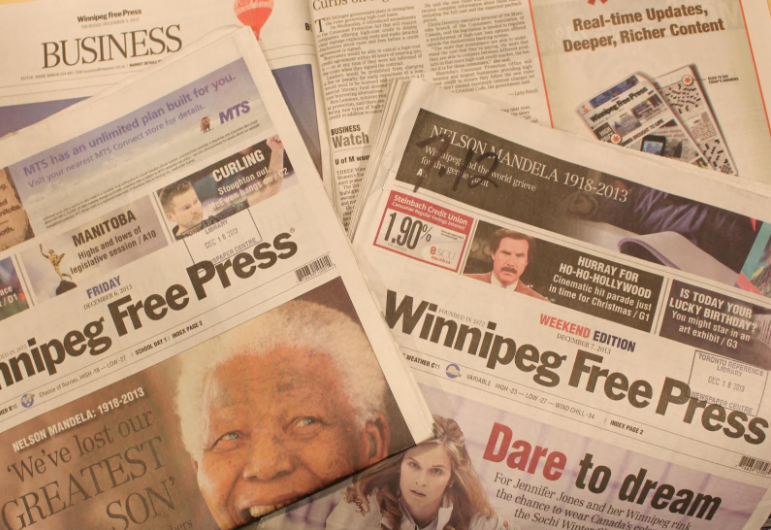 Staff ratified an agreement on May 13, 2017 that would extend their collective agreement to 2019.

Staff at the Winnipeg Free Press have ratified a new tentative agreement that will let management cut their wages in the event the company’s free cash flow drops below $800,000 in a 12-month period, in exchange for a guarantee of no layoffs until 2019.

Unifor Local 191 announced on May 13, 2017, that it had found a “Made in Manitoba Solution” that will be an addendum to its current collective agreement. If triggered, staff would see a pay cut ranging between eight per cent and four per cent, depending on staff level.

Under the terms of the addendum, management can’t make pay cuts till April 1, 2018 at the earliest. And if free cash flow goes back above $800,000, wages have to be restored to their pre-April 1, 2018 level. The decrease does not apply to commission salary workers or those who make less than $15 an hour.

Bob Cox, publisher of the Free Press, said in a post on the newspaper’s website that these are remarkable commitments. “We did it because Free Press ownership, management and Unifor recognized there had to be a better way in an industry beset by declining revenues and struggling to reinvent itself.

“This was a strong endorsement by the members for an arrangement that saves jobs and gives the paper some financial breathing room,” said Local 191 president Aldo Santin in a statement.

While this does potentially stave off layoffs, the agreement allows them in the case of the Free Press dropping printing of a daily edition.

FP Canadian Newspapers Limited Partnership, the company that owns the Free Press as well as the Brandon Sun and The Carillon, reported $18.2 million in revenues in the first quarter of 2017, a 7.3 per cent decrease from the same three months last year. Print advertising revenues were down 11.5 per cent. Employee compensation costs were down because of “a reduction in the number of employees across all of our business units.”

A leaked memo in March 2016 stated that the Free Press was at that time considering layoffs, and called for staff members who might want to take a buyout.

The Winnipeg Free Press went behind a paywall in 2015, using a micropayments strategy to get readers to pay 27 cents for a single story. In 2016, Cox told audience members at the 2016 Newspapers Canada conference that the Free Press had 200,000 registered accounts, 35,000 paid digital readers, 27,000 of which are also print subscribers, and the remaining 8,500 are read-now-pay-later subscribers or all-access-digital subscribers.

With files from Jessica Patterson

The stories you probably haven’t heard of, but should have

Read More
The stories you probably haven’t heard of, but should have