A unanimous decision from the Supreme Court has organizations worried about “massive chilling effect.”

Press freedom organizations are expressing disappointment after the Supreme Court of Canada upheld a lower-court ruling requiring Vice Media Canada to hand over all records of its communications with Farah Shirdon, a Canadian citizen who left Calgary to fight with the Islamic State in Iraq and Syria.

Vice reporter Ben Makuch made contact with Shirdon and wrote about him in 2014. The Royal Canadian Mounted Police obtained a production order in 2015 compelling Vice and Makuch to hand over the communications records.

The case is unlike most protection-of-sources cases in that Vice identified Shirdon from the beginning. Vice had argued, though, that requiring it to hand over its communications with Shirdon would discourage potential sources from co-operating with Vice and impair its news-gathering ability.

The Supreme Court ruled unanimously that the production order was justified. In their reasons, the justices pointed to the fact that Shirdon was not an anonymous source and the materials to be handed over would not include “off the record” or “not for attribution” communications. They also argued Shirdon had “used the media to publicize his activities with a terrorist organization as a sort of spokesperson on its behalf, and the state’s interest in investigating and prosecuting allegations of serious terrorism offences weighs heavily in the balance.”

While acknowledging that the Vice case differs from other protection-of-sources cases, Margaux Ewen, North America director for Reporters Without Borders, told J-Source its implications are still far-reaching.

“We remain concerned that this could have a massive chilling effect on the work of journalists,” Ewen said.

The decision does not show enough respect for the concerns of journalists’ freedom and the independent role of the media, she added.

Karyn Pugliese, president of the Canadian Association of Journalists and a board member of Canadian Journalists for Free Expression, was also disappointed by the decision. “We wanted it to go the other way, obviously,” she said. “We’re concerned about the chill it could create for anyone wanting to talk to journalists.”

Pugliese wondered whether the outcome might have been different if Vice had not identified Shirdon in its reporting and suggested media outlets could therefore be tempted in future to grant anonymity to sources where they otherwise would not have.

The CAJ and @CJFE are deeply disappointed in the Supreme Court for striking a blow against press freedom in Canada. For 3 years, VICE reporter @BenMakuch fought an RCMP production order that sought Makuch's communications with an alleged ISIS terrorist. #cndmedia 1/8 pic.twitter.com/mvgPvTkPa8

Jean-Thomas Léveillé, vice-president of the Fédération professionnelle des journalistes du Québec, said his organization would have liked the decision to make a stronger statement about the importance of protecting journalistic material. While the court did note the importance of the media in a democracy, he said, its emphasis on a case-by-case approach could encourage police to ask for more information from the media.

Cara Zwibel, director of the fundamental freedoms program for the Canadian Civil Liberties Association, said that while “the actual decision in this case is a disappointing one,” she was encouraged by language in the ruling urging that media outlets be given notice of applications for production orders. In this case, the order was granted without Vice being allowed to present its arguments against it, though Vice was able to appeal the order afterward.

Pugliese agreed that the suggestion that notice should generally be given is a positive feature of the decision.

Zwibel said it was also good to see that four of the nine judges, while agreeing with the decision, presented their own concurring reasons, putting added emphasis on the importance of press freedom.

Responding to an e-mailed question, a Public Prosecution Service of Canada spokesperson said the decision does not diminish the media’s constitutionally protected rights – “rather, it is a demonstration that in the circumstances of this case, the compelling state interest in the investigation of alleged terrorism offences outweighs the media’s right to privacy.”

“This is a dark day for press freedom, which is a basic tenet of democracy,” Vice wrote in an emailed statement. “While we’ve lost this battle, nothing can shake our belief that a free press is instrumental to a truthful understanding of the world in which we live.”

In a statement, CWA Canada president Martin O’Hanlon called the decision a blow to press freedom and  vowed to push the federal government to bolster the year-old Journalistic Sources Protection Act to better protect journalists’ sources.

The ruling referred to that act but said it is not relevant to this case because “the facts arose before the legislation came into force.”

The Supreme Court has already agreed to hear an appeal in another protection-of-sources case. Late in 2017 Quebec Superior Court ordered Marie-Maude Denis, a Radio-Canada reporter, to reveal her source for stories about a Quebec City corruption case.  Recent developments in that case mean the Supreme Court is not expected to rule on Denis’ appeal until some time in 2019 if at all. Both Zwibel and Léveillé said, however, that the Vice ruling will probably not have a significant impact on the Denis case as the issues in the cases differ. 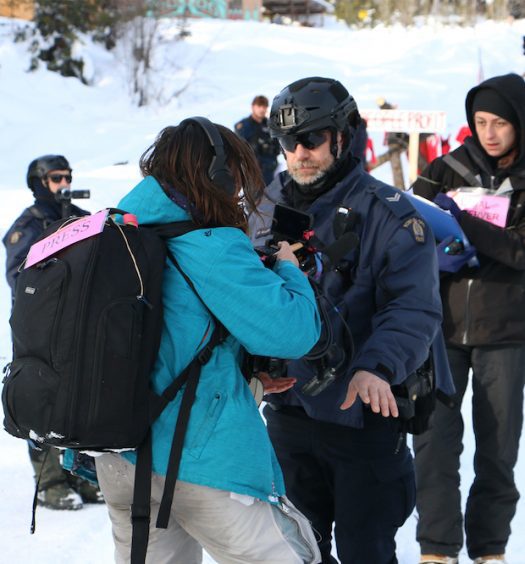 Forcing reporter to give RCMP info on ‘dead’ terror suspect &#8...