The Narwhal, founded in 2018, is now Canada's sole member at the U.S.-based Institute for Nonprofit News. Screenshot by J-Source
News

This story was originally published by The Narwhal and appears here with the editor’s permission. Read the original post here.

The Narwhal has been accepted as a member of the Institute for Nonprofit News — becoming the institute’s only publisher based in Canada.

The institute — headquartered in California — is a network of nearly 200 newsrooms that produce journalism in the public interest. Members include well-established investigative journalism outlets such as ProPublica, the Center for Investigative Reporting, Mother Jones and the Pulitzer Center on Crisis Reporting.

“It’s an incredible honour to be named among so many non-profit heavyweights, doing some of the most important investigative journalism in the United States,” Carol Linnitt, co-founder and managing editor of The Narwhal, said.

All members of the Institute for Nonprofit News produce high-quality original news reporting and adhere to standards of editorial independence and financial transparency. In 2018, the institute’s members had a total estimated staff of about 3,000 — including nearly 2,200 journalists — and combined annual revenue approaching $350 million.

While the non-profit news sector has flourished south of the border, there are few examples of thriving non-profit news outlets in Canada — in part due to differences in charitable law. In the U.S., funding journalism has long been viewed as a charitable activity, which has enabled large-scale philanthropic support for non-profit news.

Launched in May 2018, The Narwhal receives support from more than 1,000 readers. In our first year, we have won four Canadian Online Publishing Awards and been nominated for three awards from the Canadian Association of Journalists.

“As a publication that relies on donations from our readers, The Narwhal has had to reinvigorate that broken relationship between journalists and their audience,” Linnitt said. “The non-profit challenge is one that inherently drives us to reconnect with our readers to deliver the news in deeper and more meaningful ways.”

The Institute for Nonprofit News has a long history of supporting media outlets that cover critical but controversial topics like climate change, immigration, criminal justice and money and influence. The institute’s members consistently report on stories that are undercovered in traditional and legacy media outlets.

The Narwhal’s team of award-winning journalists are playing an important role in revitalizing public interest journalism in Canada, where non-profit outlets are few and far between.

Our investigations have revealed information about orphaned oil and gas wells, public funds given to secretive numbered companies, muzzling of scientists in the Trudeau-era, companies escaping fines for breaking environmental laws and how mining companies avoid paying taxes and fees to the communities they operate in.

“It’s a privilege to be supported by Canadians to do this kind of impactful public interest journalism,” Linnitt said.

Co-founder and editor-in-chief of The Narwhal.

The Narwhal Institute for Nonprofit News 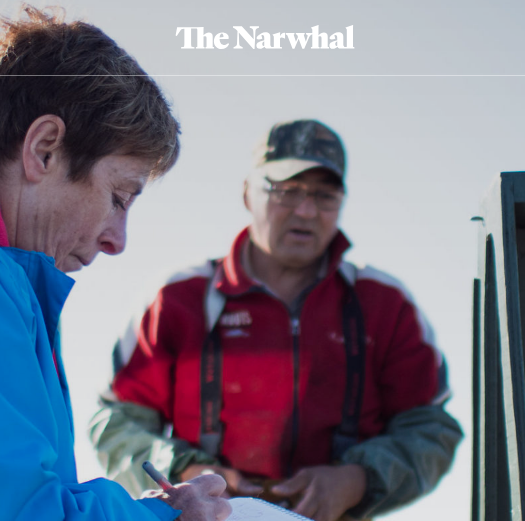