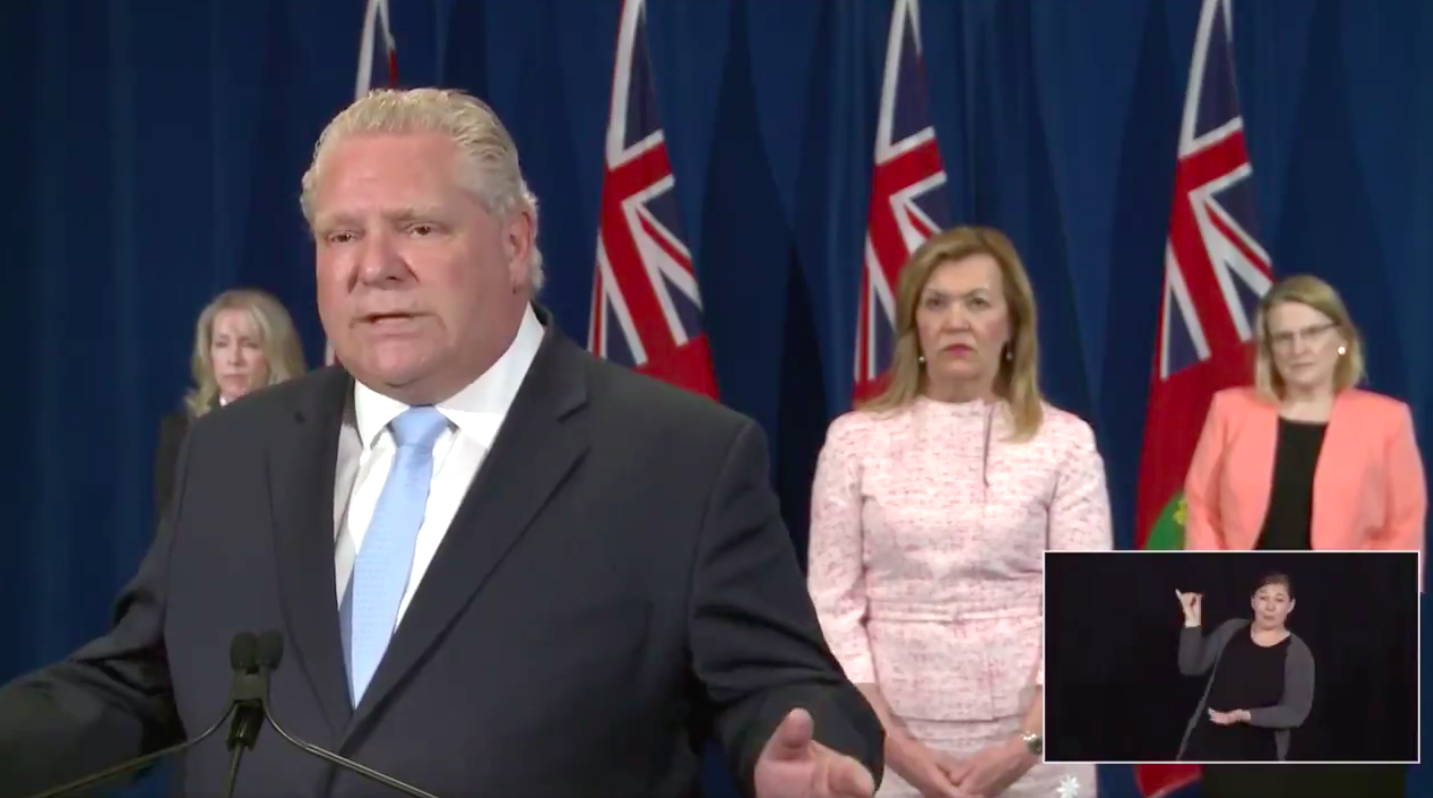 As physical scrums give way to remote conference calls, holding government to account in Ontario is becoming a game of broken telephone

As social distancing measures present new challenges to the way we report on politics, some Ontario journalists, including members of the Queen’s Park press gallery, say they’re concerned about the fairness of the questioning process at Premier Doug Ford’s daily pressers.

While the COVID-19 pandemic continues to devastate Canadian media’s economic models and access to information, reporters have lost in-person access to press briefings and are only able to participate in daily ministerial updates via teleconference.

But virtual press conferences mean reporters can no longer scrum or force their way in front of politicians, effectively curbing their ability to ask tough questions and hold ministers accountable. Instead, the process is now being mediated through a telephone conferencing line, with little transparency surrounding who gets to ask questions on the public’s behalf.

Emma McIntosh, who covers Queen’s Park for the National Observer, has been using a Twitter thread to track whether or not she gets a question at Ford’s press conferences daily since the beginning of May. The practice was inspired by Sabrina Nanji of Queen’s Park Today, who was the first to tweet out the question she didn’t get to ask.

According to McIntosh, the premier’s office hasn’t taken questions from any digital media outlets since “at least May 11.” She herself hasn’t been afforded a question since March, McIntosh says in the thread.

A quick scroll through McIntosh’s thread reveals a rotating cast of traditional media players, mostly broadcast outlets and large newspapers, who are chosen to ask questions: The Globe and Mail, NEWSTALK1010, Global, City News, Toronto Sun, CP24, CTV News, Toronto Star, and so on. Every now and then, CBC gets two.

But as of late, even reporters from mainstream media outlets are airing out frustrations as their questions go unasked. Despite calling over two hours in advance, Travis Dhanraj, Global News’s Queen’s Park bureau chief, hasn’t been able to ask a question since he asked Ford if he “failed seniors in this province,” following a graphic report from the Canadian military detailing piles of feces and cockroach infestations in Ontario’s nursing homes.

“This is part of a problem in the COVID-19 era,” says Dhanraj. “You’re not physically at a news conference, you’re sitting on a computer system. And that computer system, wherever you are in the queue, can get manipulated based on the communication staff.”

Dhanraj says he understands officials need to be selective, since they can’t answer every question from every outlet. “But I think there needs to be some equity in that.”

“I don’t think really anybody knows what rhyme or reason there is when it comes to how the order is decided,” says Dhanraj, adding that he assumes members of the Queen’s Park press gallery are being given some preferential treatment, since they represent large publications. “But there needs to also be questions from regional representation.”

“We’re also all different kinds of reporters. In general, the reporters working at the digital outlets are younger, and we represent questions from a different type of person,” McIntosh adds. “We all lose out when we lose that wealth of different perspectives.”

That sentiment rings especially true for Yafang Shi, editor-in-chief of lovingsister.com, a “Chinese language online medium based in the Greater Toronto Area that focuses on issues relevant and important to women from women’s perspectives.” In an editorial on April 25, Shi detailed the barriers she encountered while trying to ask a question to the Ford government based on concerns raised by frontline health workers that she discussed with the president of the Ontario Nurses Association.

Shi’s account details her repeated attempts to get access to the premier through teleconferences. While she was sent the call-in information after writing a complaint to a Ford spokesperson, she still hasn’t been able to ask any questions. After she connected with the teleconference operator, Shi says she was told the rule was “first-come, first-served.”

On April 22, Shi says she was the third journalist in line to ask a question, but still wasn’t afforded an opportunity. In the article, Shi wrote that her “heart sank with disbelief and outrage” when she heard journalists who phoned in after her get to ask their questions:

“With a journalism career spanning for more than 20 years, I have attended numerous press conferences and asked questions about urgent and important issues to many politicians,” Shi wrote.

“All journalists, including those from diverse communities, should have equal access and opportunities to ask questions at press conferences organized by the Ontario provincial government … It is a vital part of the [sic] democracy that journalists of colour have equal opportunity to ask questions.” On top of barriers to access, ethnic media is struggling to stay afloat financially under the pandemic, as multiple outlets, such as the Canadian Jewish News, have folded entirely.

Shi’s account isn’t an isolated one either. McIntosh ran a similar experiment, attempting to call in at 9 a.m., four hours ahead of the 1 p.m. start time. After being told she couldn’t join the queue so early, McIntosh kept trying on the hour until they finally let her in, two and a half hours early. She was told there was no one else on the line yet, and got in the question queue right away.

“I was like… ‘If this is in chronological order, if there’s any sort of fairness to it the way there would be in a normal scrum, I have to be first in line.’” Again, she didn’t get to ask any questions. Both Shi and McIntosh have raised their concerns in emails to the premier’s office. Neither have received a response.

The premier’s director of media relations did not respond to requests for comment by publication time, but did reply with access to the teleconference line information for Ford’s June 3 COVID-19 update when requested.

When J-Source called the teleconferencing line, an operator confirmed that once put into the queue, the system is “first-come, first-served.” However, Queen’s Park Briefing reporter Jack Hauen told J-Source that when he called in on June 2, he was told by an operator that the system is “not based on who calls in first.”

In a May 24 episode of Canadaland, APTN reporter Kenneth Jackson recounts his attempts to ask Ford why the Ontario government was allowing youth to age out of the province’s child welfare system during a pandemic:

“I’d asked his office for a week and they wouldn’t say anything. It started driving me crazy, like, do you not see the urgency of this? And I went in my basement, I went on that silly teleconference call, for two days I couldn’t get on. I was like, ‘man, I’m on this call for over an hour and a half. This is like prime real estate for me… I can’t waste this much time,’” says Jackson.

“I asked someone… ‘how did you get a call in? Are they just purposely doing this to me because I’m APTN?’”

Calling in early the third day, Jackson tried a number of times until he found an operator willing to put him in the queue. “I made damn sure I was on that list.” He turned out to be first in line, and just three hours after finally getting his question off, the Ford government told APTN they would place a moratorium on the issue.

Queen’s Park press gallery president Allison Jones said the gallery has been pushing for equal access since they first became aware questions weren’t being taken on a “first-come, first-served” basis. Responding to an emailed complaint from Shi on April 30, Jones acknowledged her concerns, writing “it is an issue I have been pursuing.”

“We have a lot of very talented reporters in the Queen’s Park press gallery from online and new media outlets, and we would all benefit to hear the answers to their questions,” said Jones. “We’re hopeful that the COVID-19 situation soon improves to the point that we can resume an in-person element to press conferences and not have to rely on teleconferences.”

Reporters from the press gallery have also expressed concern around the types of questions being asked at the expense of others.

A day after reports surfaced that Ford had briefly visited his cottage despite telling Ontario residents to stay home, McIntosh tweeted that Sportsnet got a question in. It had been 38 days since she had last asked a question.

“There were a couple days, even a couple of weeks, where every day, there was a question about whether garden centres were going to open soon,” says McIntosh. “Yeah, that’s important, especially to people who run garden centres and people whose livelihood depends on that… Is that important to someone who does not have the money to have a place that even has a yard? Probably not. Should it be on the docket every single day? Probably not.”

Last week, a reporter for BNN Bloomberg asked Ford if investors in long-term care companies should be expected to “sacrifice profit for quality of care.”

And just yesterday, while Ford did respond to a question regarding the U.S. protests surrounding the police killing of George Floyd, prompting him to deny that Canada has “systemic, deep roots” of racism, multiple reporters including one from HuffPost Canada who wanted to ask the premier about his support for Donald Trump were not put through.

“At the end of the day, there are harder questions I think the government needs to answer,” McIntosh says.

Karyn Pugliese, president of the Canadian Association of Journalists, says there has to be more transparency around the process of selecting who gets to ask a question, citing Jackson’s case as an example of alternative media as essential suppliers of information for their respective communities.

“Because [Jackson] was able to bring that question to the premier… he actually looked into it and decided to make a policy change,” says Pugliese. “It’s in the government’s best interest to take those questions.”

Watching a recent press briefing, Pugliese says she noticed when Ford received a question from the Toronto Sun, he appeared “to be very happy to get it, like, he seemed to want to really answer that question. So it makes you wonder, right?”

“I’m worried about how democracy functions when you stop listening to other voices,” says Pugliese.

McIntosh echoed this fear, wondering if she’ll lose more access once the pandemic starts to wind down and there’s less of a need for daily pressers. “This kind of gives the premier’s office a mechanism to punish reporters who ask difficult questions,” she says.

Whether or not that’s true, Dhanraj says it’s a valid question to ask, “especially when we’re talking about democracy and journalists having the right and responsibility to ask leaders hard questions, valid questions and questions that are sometimes uncomfortable.”

Editor’s note: This article was updated on June 4, 2020 at 10:45 a.m. ET to add that Yafang Shi was given access to the premier’s teleconference after writing a complaint to a spokesperson. This story originally stated that lovingsister.com brings news to a GTA audience and has been corrected to reflect that it is based in the GTA. 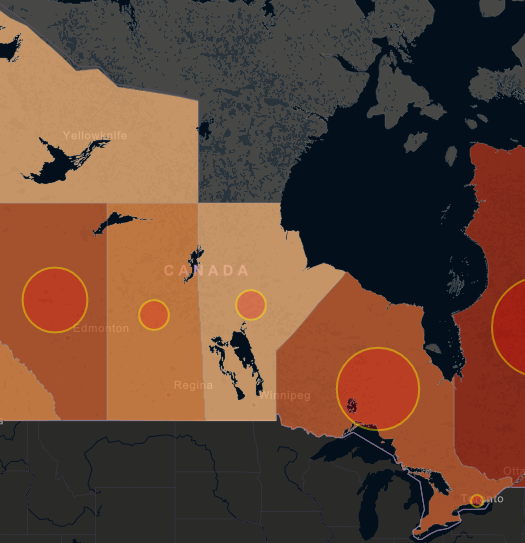