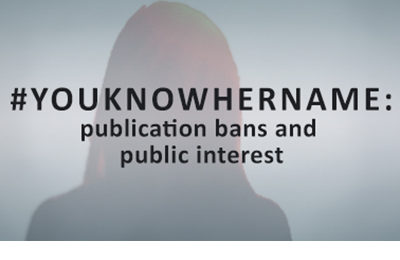 The Halifax Chronicle Herald faced a choice: break the law, or defy the wishes of a dead girl’s parents.

Part ethics exercise and part curriculum resource, the case studies have been highlighted on J-Source in the past, regarding coverage of former Toronto mayor Rob Ford and his family in 2013. In an ongoing series, we’ll be highlighting some more of those cases here as they become available

In November 2011, 15-year-old Rehtaeh Parsons attended a small, alcohol-filled house party in Nova Scotia. That night, a 17-year-old boy photographed another boy, 16, having sex with Rehtaeh as she vomited out a window. In the photograph, the 16-year-old gives the thumbs up sign with one hand while holding her hip with the other. He smiles at the camera.

The photograph was sent to two young women, and was eventually shared on social media where many of Rehtaeh’s classmates would see the photo. Her mother, Leah Parsons, told the CBC that sharing the photo “was like a wrecking ball [that] hit her [daughter] emotionally and she was left in pieces.” Her daughter was repeatedly bullied at school and harassed by boys she did not know. She changed schools but continued to struggle with depression. Police did not lay any charges, citing the difficulty of proving sexual assault in court.

On April 4, 2013, Rehtaeh attempted to kill herself. She died three days later when she was taken off life support. Her death garnered international attention and outrage, and inspired the creation of a Nova Scotia cyberbullying law allowing victims to sue or seek a protection order from the courts. She became, as one reporter called her, Canada’s “most famous victim.”

On Aug. 8, 2013, almost two years after the incident, police charged the two boys with child pornography offences. Once charges were laid, two publication bans came into effect. Because they were under 18 at the time of the offence and they were tried in youth court, the names and identities of the boys cannot be published in accordance with the Youth Criminal Justice Act. As a victim of child pornography, Rehtaeh’s identity is protected under the Criminal Code.

At the Chronicle Herald in Halifax, staff began to censor their reporting, unsure of what they were allowed to publish under the bans. The resulting coverage lacked background and context; because of the anonymity surrounding the situation, it was referred to as the “high profile Halifax child pornography case.” Without the ability to publish Rehtaeh’s name in relation to the trials, the story that received international attention and inspired legislation was at risk of quietly fading away.