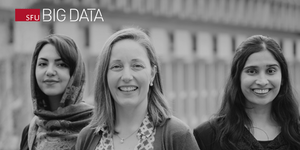 The Informed Opinions Gender Gap Tracker powered by SFU combines big data and computational linguistics to analyze how women’s voices are represented in Canadian media. This tool has downloaded and analyzed thousands of news articles posted on main media outlets in Canada, including CBC, CTV, Global News, Huffington Post, the National Post, the Globe and Mail, and the Toronto Star. Then, for each article, this tool uses Named Entity Recognition techniques to find out who is mentioned and who is quoted in the text.

The goal for the research team using the Gender Gap Tracker is to help decision-makers in mainstream media see how well they’re representing women’s voices. Informed Opinions’ goal is to motivate journalists to achieve gender parity in Canadian public discourse by 2025. Attend this upcoming SFU event and hear Maite Taboada speak about the potential of the Gender Gap Tracker on assessing a range of issues including whether women’s voices in the media are restricted to certain topics, and whether their voices are portrayed in a way that conveys a systematically more positive or more negative sentiment compared to male voices.