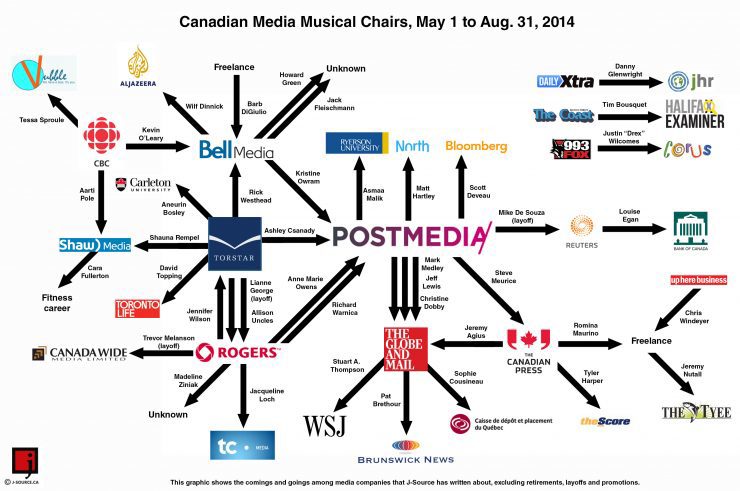 We mapped all the moves among media companies J-Source has written about between May 1 and Aug. 30, 2014, excluding promotions, retirements and lateral moves within the same company.

Finding it hard to keep track of all the moves in the media industry? J-Source has you covered with this infographic.

We mapped all the moves among media companies J-Source has written about between between May 1 and Aug. 31, 2014, excluding promotions, retirements and lateral moves within the same company.

Thanks to all our readers who kindly pointed out media moves we had unfortunately missed:

You can also recap the moves between Jan. 1 and Apr. 30 here.

These graphics show layoffs and retirements from media companies during the same period. Unsurprisingly, the largest number of retirements was at the CBC, which announced it would cut 657 jobs in the next two years and up to 1,500 jobs by 2020. Several high-profile journalists said they would retire to save the jobs of younger journalists without seniority.

Kevin Dougherty, The Gazette, in Montreal.

Rheal Seguin, The Globe and Mail.

We always like to know about job changes in Canadian journalism—keep us posted by emailing associate editor Tamara Baluja at tbaluja@j-source.ca or tweeting her @tamara_baluja.