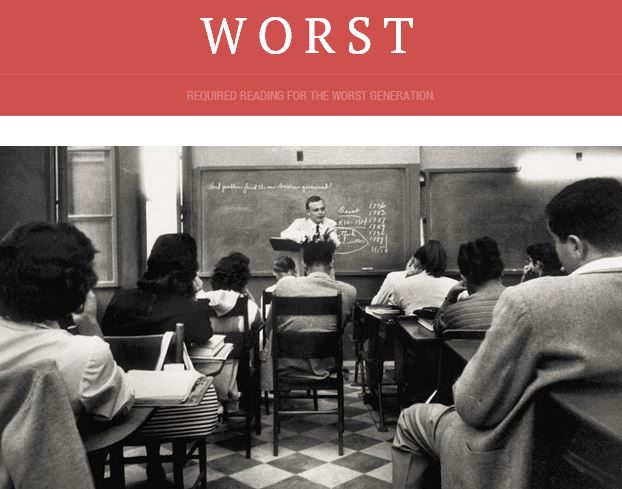 Why some journalism grads no longer wait for a job offer

UBC journalism grad Jimmy Thomson and a close circle of friends launched Worst, a blog about media, entrepreneurship and millennials. They had access to writers, editors, photographers, illustrators, web designers and people with the business savvy to help keep them afloat, so why wait for a job offer?

The feeling of regret began creeping in within weeks of arriving at journalism school. It wasn't that I had chosen the wrong school or the wrong profession, but that the profession was in serious trouble, and it might not be there for me once I graduated. Conventional journalism business models were falling apart faster than we could learn about them, and expectant grads applied optimistically for internships—often unpaid—at companies with freshly gutted newsrooms.

We all know the bleak state of the industry. It's been highlighted even more starkly in the past month, as my classmates and I graduate under the industry-wide pall of the latest round of CBC cuts. Professional journalism is under assault from all sides, and young journalists are taking the brunt of it: they’re the first to be let go when things get rough. Few companies are hiring, and any jobs that pop up are flooded with qualified and experienced candidates that were just discharged from the media outlet next door.

This is common knowledge among veterans and fresh graduates alike. Six of the students from my graduating class—25 talented journalists with freshly minted master’s degrees from UBC, a top journalism school—have secured full-time jobs within the industry, and those “jobs” are all temporary internships.

That’s why my friends and I decided to start a media company.

That may seem counterintuitive, I know. But don’t try to sell me a ticket for a return trip on the Titanic just yet.

Here’s the thing: we really, really want to be journalists. And we’re good at it. In my close circle of friends, I have access to all of the skills that a magazine or newspaper has in writers, editors, photographers, illustrators, web designers and people with the business savvy to help keep us afloat. We even have someone with an espresso machine. "So," became the mantra, "why not just do it ourselves?"

WORST, online at wrst.ca, is the product of that mantra. We’ll publish features, news and commentary on the ways that young people are interacting with an unwelcoming economy. It’s not about pessimism or entitlement. It’s about finding the means to thrive in adverse conditions, which, of course, is what we’re trying to do ourselves.

We have the opportunity to create the jobs we want. If we fail, so be it. We’re young, and ramen isn’t so bad. In the process, we’ll learn about what it takes to make it in the current media economy.

We don’t expect anyone to give us a job, but the great thing about the business is that startup costs are essentially nil. We proved that at the start of May when we launched the precursor to the site for peanuts. Since then we’ve had over 10,000 visitors and a nod from Wikipedia co-founder Jimmy Wales.

What’s there today is a blog about media, entrepreneurship and millennials—the “worst generation,” according to the opening scene in Aaron Sorkin’s The Newsroom—because that’s what we need to understand most before the full site goes live later this summer. We’re starting to talk about what Gen Y wants from the media, how to reach millennials in advertising and who and what is inspiring us as we get started.

At some point we won’t be able to do it for free anymore. The founders will, sure, but we don’t want to be yet another organization asking talented young writers to work for nothing. So where is the money going to come from?

We aren’t sure. We don’t know how to solve the monetization problem any more than the media giants do. We are less a company right now than a group of people who would be freelancing, who refuse to be buffeted by market forces on our own and are instead banding together and building a brand.

That brand is where our value lies. That brand will allow us to host events, create partnerships and yes, even carefully create sponsored content. That brand may eventually grow big enough to catch the attention of someone bigger.

Or maybe it won’t. But at least we’re not waiting around for a job offer anymore.

Jimmy Thomson is a recent graduate from the UBC Graduate School of Journalism and editor-in-chief at the newly minted media company, wrst.ca.