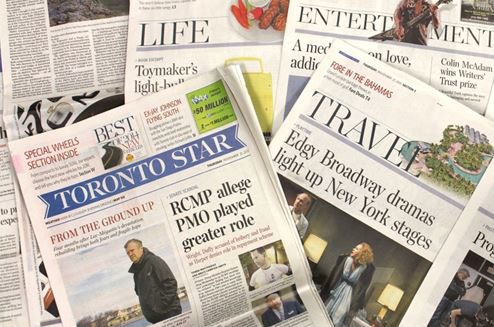 When Ann Rauhala heard that the Toronto Star was suspending its internship program, she only had two words: Oh no.

“They were really special (internships) for a couple of reasons” said Rauhala, an associate professor at Ryerson’s School of Journalism in Toronto.

On Feb. 13, 2018, the Toronto Star confirmed it was putting its internship program, which consisted of a one-year paid internship and a paid summer program, on hiatus. “We have not completely killed the program,” Torstar spokesperson Bob Hepburn told J-Source. “We have to assess what the business conditions are.” The current cohort of interns will finish their terms.

Melissa Andrews, the unit chair of Unifor 87-M local which represents the Star’s newsroom, told J-Source in an email they hope this will be a temporary measure. “We are in the process of communicating with our members and management about the best way forward,” she wrote. “Our shared goal remains strong journalism and good jobs for those producing it.”

Rauhala, who oversaw Ryerson’s internship placements for six years, said that the Star’s program was unique among internships in Canada. “What the Star was doing when they started this was placing real value on the professional training of young journalists, and also saying with pay cheques that it was worth compensating interns who were stepping in and doing the work of research and writing and reporting the news.”

Though Ryerson wasn’t involved in placing students in the Star intern program because the newspaper had its own program, Rauhala says a significant number of Ryerson students still got internships every year.

Nicole MacAdam was one of them. In 1998, she became a summer intern at the Star, working on the national/foreign copy desk. “You were editing important things,” she recalled, noting that she was rotated through several copy desks. “It was a really great training ground for me.” After her summer internship, MacAdam was hired on a full-time basis at the Toronto Star.

Twenty years later, MacAdam is executive producer of the Financial Post — a job she doesn’t think she’d hold today if it weren’t for that first internship. “Because I got the internship at the Star and I was working on the desk, it actually kind of opened the door to a different career than I thought I would have,” she said. “I ended up more in the editing stream and also doing graphic design and page design.”

The list of notable Star internship alumni is long, and includes journalists who now work at outlets across Canada — and at least one current New York Times staffer. Former interns have won just about every award available for journalism in Canada.

Such sad news. I too started at the Toronto Star as an intern. So did @TanyaTalaga @shephardm @andrew_chung_ and so many more. It was one of the only places in the country you could get your foot in the door… https://t.co/Rq6ML6XAVX

so shortsighted. i have many opinions about the Star, but i learned a tremendous amount and met excellent people when i started there as a one-year intern literally 20 (!) years ago. not sure how the newsroom will fare without the energy and enthusiasm interns bring. https://t.co/7gbcARuDGL

I owe many of the opportunities I have gotten in journalism and plenty of my closest friends to the @TorontoStar's internship program. Hope the cancellation truly is temporary and things turn around for this place. https://t.co/ixFRu7fIOh

This is gutting. The Star internship program made me, the paper, and Canadian media better. https://t.co/9H34kB1fKw

I was fortunate to spend my summer interning at the Star more than a decade ago and it was an incredibly valuable experience for me as a young journalist. This is such incredibly sad news… https://t.co/IunfxVjXIu

Mary McGuire, an undergraduate supervisor and associate professor at Carleton University’s School of Journalism and Communication, said that in the last few years some of their former students went on to great things after interning at the Star. Jayme Poisson, a Carleton graduate who is currently an investigative reporter at the Star, has been nominated for three National Newspaper Awards and has been on two award winning Star teams. Amy Dempsey, a feature writer at the Toronto Star, is an NNA winner.

The amount of former interns who became celebrated Star staffers also show what else the newsroom will be losing. “This is a huge loss not just to young, talented, aspiring journalists in programs like ours, but it is a huge loss to the Star,” said McGuire.

Jackie Hong, was sad to hear the internship was being suspended. Currently a courts and crime reporter at Yukon News, it was at the Star that Hong learned the ins and outs of her beat. During her internship, editors recognized her interest in court and crime reporting, and regular beat reporters took her under their wing. “That really helped my develop my skills,” she said. “I don’t see how I would have developed them without that internship.”

She believes the Toronto Star internship program was one of the best training grounds for young journalists.

“I don’t think you’ll find anything anywhere else in the country that actually gets you in the newsroom and actually pays decently.”